Those of you who follow me know that I just launched The Life, Love, and Alzheimer’s Podcast last week. I initially had the idea to start a podcast back in May. I spent a lot of time researching podcasts, how to create them, what tools to use, etc. I spent even more time teaching myself how to record and edit podcast episodes, as well as how to post them on my website, iTunes, and Google Play. It was about three months from the time I had the idea to start my podcast to the time I actually launched my podcast. Three months of putting in a lot of time, work, and energy, knowing that I wasn’t going to make a dime for any of it. My podcast has been a labor of love. It’s something that I feel passionate about and doing it doesn’t feel like work to me. It’s one thing that I actually get excited about and, if you know me, I don’t get excited about much. But, I was so excited to create and launch my podcast.

Putting in so much time and energy on a project and being so excited for it to come out, I naturally expected everyone else to be as excited as I was. I guess I somewhat expected all of my friends and family to jump up and down with excitement and pride, but they didn’t. A lot of people congratulated me and told me how proud they are, but a lot of people didn’t. We always expect everyone to be as excited about our stuff as we are, but it rarely ever turns out that way. Everyone is too busy with their own stuff. Not everyone realizes what you’re doing or how much time and work you’ve put into it. Not everyone is going to be as excited as you are and that’s ok. The only person who is going to care as much, if not more, than you do, is probably your mom. Oh wait…

Throughout this entire process, I have thought about my mom constantly. That doesn’t come as much of a surprise given that the podcast is about her and I think about her constantly anyway, but still. The fact that she is the one person who I can’t talk to about it has never been lost on me. I’ve thought so much about how much I wish I could tell her. She would be so unbelievably proud of me. She would be in awe of the fact that I created it entirely by myself, after teaching myself how to do everything. She would tell everyone she knew about it. She would even tell everyone she didn’t know, like the cashier at the grocery store, whether they gave a shit or not. It wouldn’t matter. She would be that proud. That’s just what moms do. And let me tell ya, not having that just flat out sucks.

But, there’s also another thought that has not been lost on me…

My blog, my book, my podcast, they’re all about my mom. If she had never gotten Alzheimer’s disease, I probably would’ve never had a reason to start a blog or a podcast. I would’ve never thought about writing a book. I would probably still be miserable at my old job, wanting to quit every single day, but never having a good enough reason. My mom was my reason. My mom is my reason. For everything. Without her, if she had never gotten sick, I wouldn’t have any of this. I would’ve never had a reason to start. That makes me feel terrible in a way, like she had to suffer so that I could find my purpose. I know that’s not true. I might have started writing eventually anyway. But the thing is, I know my mom would have done that for me. She would have agreed to any amount of suffering if it would have brought me any amount of joy. That’s just what moms do.

It’s such a catch-22. I have created something that I’m really proud of and my mom is the one person in the world who I wish I could share it with. She’s the one person in the world who would be as excited as me. She would be prouder of me than anyone else. She’s also the one person in the world who I can’t share it with. She would never understand. Some people might say to tell her anyway. I only wish it was that simple. Sure, I could do my best to try to explain it to her, knowing that she won’t really “get it.” But, it will never have the outcome that I so desperately long for. She won’t understand. She won’t be able to say that she’s proud. She won’t be excited for me. She might even get upset if I tell her what it’s about. She doesn’t even know what Alzheimer’s is, let alone that she has it. Obviously, she knew she had it at one point, but that fact has long since escaped her. In my heart, I’ve told her about all of my accomplishments and in my heart, I know she’s proud. It’s ok if that doesn’t make any sense to you. It doesn’t have to. I know exactly what I mean.

As much as it sucks to not be able to share things like this with my mom, I keep reminding myself that if she didn’t have Alzheimer’s in the first place, I wouldn’t be doing any of this. In situations like this, people like to say that something is a blessing and a curse. I will never say that Alzheimer’s has been a blessing, but I will say that it has given me a lot.

I already had a little bit of each of these things, but now I have a whole lot. More than I probably would have ever had if my life had never been touched by Alzheimer’s. Such a catch-22.

Mom, if you can somehow feel these words as I type them, please know that I do it all for you. You are my one and only reason. I owe everything I am and everything I do to you. I don’t need you to tell me how proud you are. I can feel it. 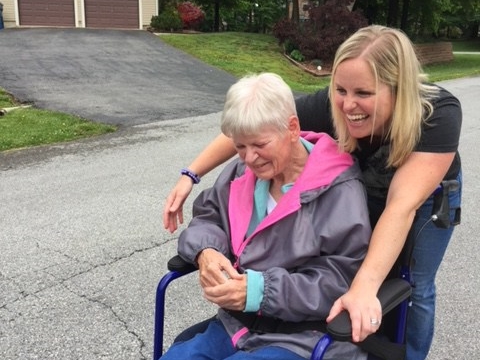